Here you can learn English and Orthodoxy at the same time! 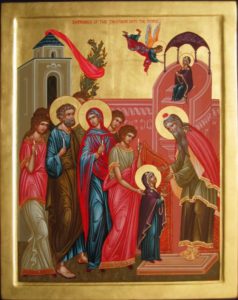 This Wednesday we sang the chants and for the feast of the Entry of the Most Holy Mother of God into the Temple, celebrated on December 4th.
Troparion, tone 4: Today is the prelude of the good pleasure of God,/ and the proclamation of salvation for the human race./ In the Temple of God/ the Virgin is clearly revealed,/ and beforehand announces Christ to all./ To her, then, let us cry aloud with a mighty voice:/ Rejoice, fulfillment of the Creator’s plan.
Kontakion, Tone 4: The Savior’s pure temple,/ the precious bridal chamber and Virgin,/ the sacred treasury of the glory of God,/ is brought today into the house of the Lord;/ and with her she brings the grace of the divine Spirit./ God’s angels sing in praise of her:/ She is indeed the heavenly dwelling-place.

We also continued the discussion about different heretical teachings. As a result, we´ve discovered the key ideas of various heresies and learned the true Orthodox teaching, based on the God´s revelation.
You can find the task in the worksheet and check yourself with the following list:
– Christians should become Jews first or more Jewish. – Judaizing
– “Knowledge” saves and may be available only to a select few. – Gnosticism
– Rejection of Hebrew “god” in favor of New Testament “god.” – Marcionism
– People who apostatize or commit serious sin can never be absolved. – Novatianism
– Moral unworthiness invalidates the sacraments of clergy (even repentant). – Donatism
– Christ is not God, but only the highest created being. – Arianism
– Christ will reign for a literal 1,000 years after the Second Coming. – Chiliasm (Millenarianism)
– Man can save himself without Divine grace. – Pelagianism
– All will be saved, even if they reject God. – Apocatastasis
– Jesus had only one will, the divine. – Monothelitism
– Jesus had only one nature, the divine. – Monophysism
– Icons should be removed from churches and destroyed. – Iconoclasm
– The Holy Spirit proceeds from the Father and from the Son as
another source. – Filioquism
– Church governance should be based on ethnic divisions. – Ethnophyletism
This list contains the names of ancient heresies that at the same time can be heard even nowadays. For example:
– Jehovah’s witnesses follow the steps of Arius,
– Catholics confess Filioquism,
– Coptic, Ethiopian, Syrian and Malabar Jacobite and Armenian churches are monophysist,
– many Protestants even now claim icons to be idols,
– some Protestant denominations teach Chiliasm,
– some “Orthodox” Christians accept the ideas of the heresy of Apocatastasis…
This is rather dangerous and sad. Heresies are mentioned in the same list of the works of the flesh, such as adultery, idolatry and sorcery in Galatians 5:19-21. As we know from the following words of saint Paul, «those who practice such things will not inherit the kingdom of God» (Gal. 5:21).
Next time, on December 14th, we are going to learn more about different religions and compare some points of their teachings.